Why this pilgrimage route at this time?

At the Brigid of Faughart Festival 2012 Karen Ward and Dolores Whelan attended a lecture given by Anthony Murphy (co-author with Richard Moore of “Island of the Setting Sun: In Search of Ireland’s Ancient Astronomers”). He spoke about the ancient alignment between the holy well on Faughart Hill in County Louth with the Curragh of Kildare, the two primary locations of worship to Brigid in Ireland.

As Dolores and Karen listened they realised that Brigid’s pilgrim path, which linked these two most prominent places of devotion to Brigid in Ireland, was unfolding before their eyes… This was both exciting and challenging! This initiative was inspired by a strong desire in these two Irish women to revive the ancient art of pilgrimage, a spiritual practice central to the indigenous spiritual traditions of this land. 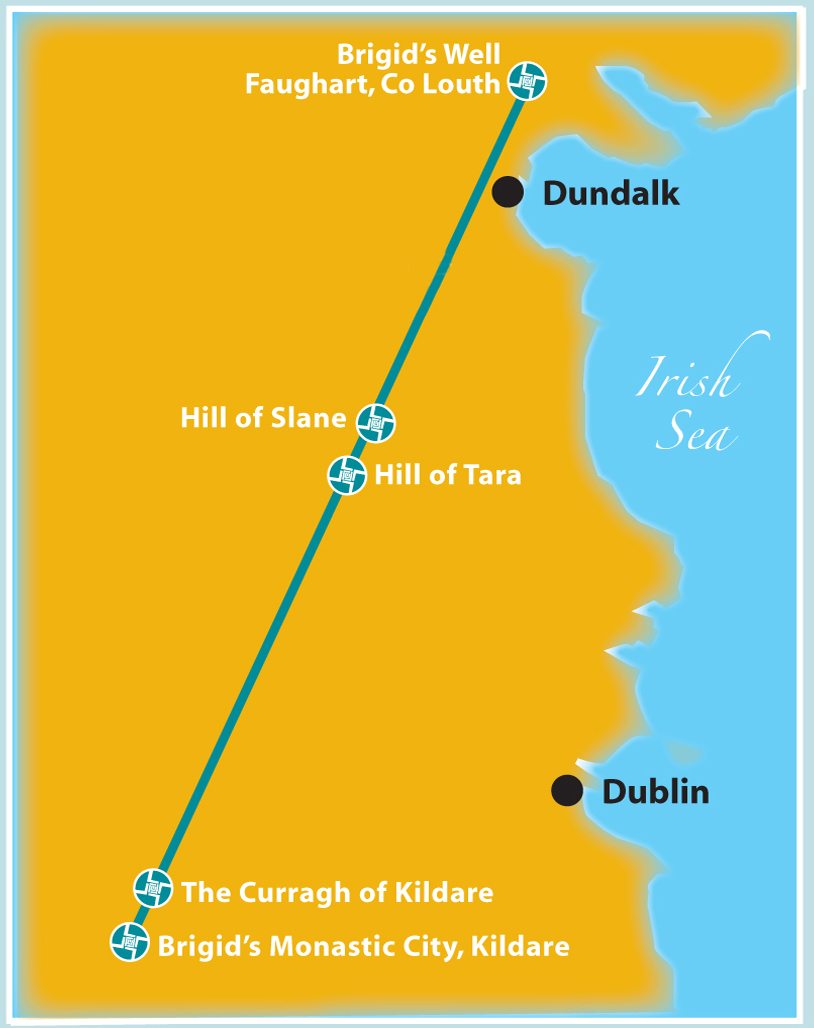 They also saw that this pilgrimage had the capacity to awaken people to the consciousness of Brigid, who in all her different forms, Goddess, pre-Reformation Saint and wise woman, represents the divine feminine within the traditions of this land and belongs to the whole population of this country. 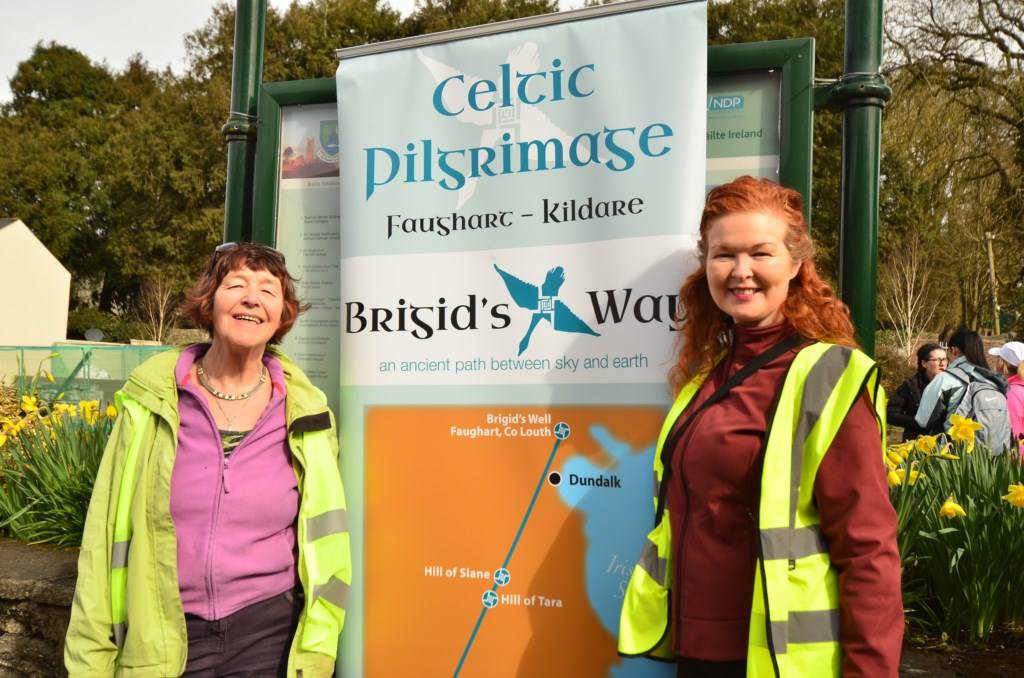 “As we began to research the Pilgrim route many wonderful synchronicities followed: Time and time again, we just ‘happened’ to meet people who had the right direction or the perfect piece of information we required.

At Tara we met Sandra Nelson, a wonderful healer, who shared a vivid dream she had had a few nights previously. In it she is on the Hill of Tara standing before a portal-like doorway when a representative of the family who have been the guardians of the Hill for centuries hands her a Brigid’s Cross through the doorway. She accepts the traditional woven cross and the dream ends.

The next day during her first 3 healing sessions the word ‘cam-in-o’ keeps repeating in her heart. Each time she asks if her client knows what it means and she receives a similar answer”.

“Isn’t that the Camino – the Spanish pilgrim pathway?” Instinctively she knows that it is not, but looks like path that runs outside Maguire’s coffee and gift shop at Tara. Then Dolores and I begin to explain that we are here to research Brigid’s Way, a reconnection with the ancient pilgrim route that continues from the Hill of Slane right outside where we were standing at Tara along the path by Maguire’s. This was such a synchronicity for us that we were indeed following our hearts. Sally Cox, who owns Lisnawilly estate on the outskirts of Dundalk, astonished us when she shared how, Harold O Sullivan a local historian, confirmed that a small part of the ancient Brigid pilgrim pathway from Faughart to Kildare passed through her land.

On the final leg of our journey, we entered the Curragh and a fox; Brigid’s totem animal ran by us in welcome. We enjoyed sharing our stories with the Brigidine Sisters; Mary, Phil and Rita who tend Brigid’s Flame in their Kildare home with such reverence and grace. Several times we experienced Brigid’s marvellous sense of humour. Anthony Murphy shared how apt it was that he was a part of a Pilgrim walk since his grandmother Brigid had a shoe shop in Dundalk for many years. Dolores’s father owned a shoe factory which is still run by family members and one of Karen’s Grand Aunts also had a shoe shop in Dundalk on a different street and her name was Brigid too. It seems like Brigid recognised the walking gene in the three of us!”

Photo of Dolores and Karen by Anthony Murphy https://mythicalireland.com/

Read more about Karen and Dolores

Join us on Brigids Way

Come walk with us for the 9 day Pilgrimage or join for Day 1 or Day 9.